I have always had anxiety. I didn’t know what it was for a long time. Looking back, it’s something I’ve struggled with most my life. But, I also have a very adventurous spirit.  Juggling these two sides of myself has always been a challenge. When I graduated High School, I knew it was LA or New York for college. There was no way I was going to stay in Colorado. For someone with anxiety, this seems like an odd choice, but I was determined to experience a big city. New York stole my heart. I left to New York to get my BFA in acting at age 18 (scared shitless of course).

The first semester my anxiety was the absolute worst. I would sit in my dorm room and hear people in the hall laughing, drinking, going out to bars, and I would sit in fear. My roommate would invite me out, and on the odd occasion I would go, but frequently I would make an excuse not to go. I came home to Colorado that Christmas depressed, but determined to make a change that next semester. I made a rule for myself; THE RULE OF YES. If someone invited me to do something and it sounded even a little bit fun, I would have to say yes (even if it made my stomach turn). Suddenly my college experience changed. I made new friends and an exciting new life in New York, just from simply deciding to say YES.

THE RULE OF YES has continued to be my compass in navigating my anxiety. When the opportunity to live in London this year presented itself, a lot of fear came up for me…
– I will have no friends.
– My husband will be at work all the time.
– I won’t know my way around.
– I won’t know the grocery stores, or the pharmacy or any stores!
– I won’t have a gym.
– I won’t know the currency.
It seemed like a mountain of anxiety. But back to the rule, does it excite you? Do you want to do it? Then just say yes. You’ll figure it out.

Getting settled in London was a slow burn. Things like figuring out a new lock on a door gives me anxiety. I always say to my husband; “I know this is stupid but, can we just practice all the keys?” He patiently, not getting it, will stand with me as I confirm I can open all the doors in our new London home. That’s what I’ve learned, you just have to own it and work through it, even if it’s stupid to someone else. Slowly the scary becomes easier.

Each day I would say to myself, “walk a bit further,” “try a new place.” You know the saying, “do something that scares you every day.” For me that could be simply ordering a rotisserie chicken at the grocery store. I would tell myself, “do it once, and it’ll never be scary again!” So, I say yes, I walk to the counter, I order the chicken. Slowly this foreign neighborhood and this beautiful city, became an exciting place of wonder.

I found comfort in my local patisserie.  I bought Scotch Eggs at the butchers. I made friends with other dog owners. Three months went by in a flash. Marylebone, in the middle of London, had become my home. But something even more exciting had happened; by saying yes to this three-month adventure, I now knew I was capable of navigating a foreign city by myself. To me, this was a big deal!

Last month my husband had to go to Australia for work. I could join him, but it meant he would be working most of the time. I would have 5 full days in Sydney by myself. Eeek!

Each morning I would wake up, look at my Lonely Planet book and say, “what excites you?” I would map out my walking route by taking lots of screen shots of the map (since I didn’t have wifi) and I’d say to myself, “If you get lost, there are always cabs and there is always a café somewhere to get wifi. Relax and see the city!”

On my flight home I felt proud of myself. Not one day did I sit in my hotel scared. I went to Zoo by myself, took a gondola up a the hill with a Chinese family, I took a boat to Watson Bay, where I hiked away from all the tourists, through a neighborhood to find a hidden beach. 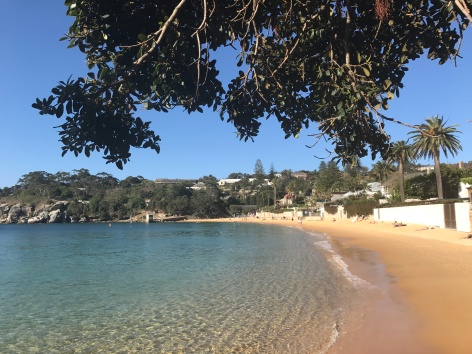 I ate oysters by myself at a local pub,

shopped in thrift stores, and had lunch by myself in Newtown.

It was one of the most liberating weeks of my life.  Was my anxiety there?? Yes! But I trusted in myself that I was going to be okay. I trusted in my mantra.

I share this because each of us has our own inner battle that we’re fighting. What may be easy for some, is terrifying for others. That’s okay. When we own these things about ourselves and don’t judge them too harshly, we’re able to push past them. Saying yes has been a powerful tool for me. I hope you say yes to whatever it is that excites you, even if it scares you a bit.

4 thoughts on “My truth about anxiety.”