I went to Morocco a month ago. I had never been to a Muslim country before, and I’d be lying to you if I said I wasn’t a little afraid. But, as we arrived at the hotel, (one of the most beautiful places I’ve ever stayed), I walked out onto our deck and over a loud speaker a call to prayer began to echo throughout the city. I watched as a flock of black birds flew through the sky and I had this feeling that I was there to learn something.  What I love most about traveling is that you get a quick window into the lives of people completely different from you.

As we walked the streets in Marrakech what I found myself honing in on was the women.

I didn’t see a lot of them. In fact, I’ve never been to a place so filled with men. When I did get to observe the women in 115-degree weather, they were always on the go.  They were dragging their kids to and from school, they were shopping in the farmer’s markets for evening dinner.

They were helping their elderly mothers through the streets.

They were scolding their kids for jumping in puddles and getting dirty. They had their, “to-do lists.”  They were us.  No different.  I watched so many of the men laze about. But not one woman. 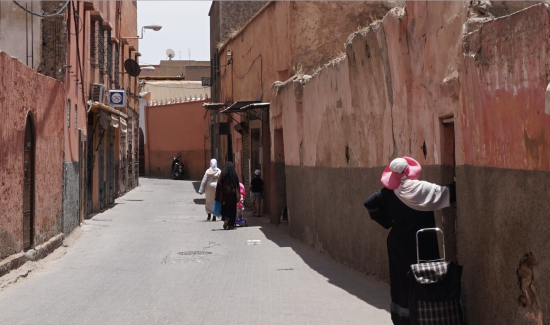 I watched one woman walk a goat, push a carton filled with nuts, and drag her 4-year-old through the streets.  I mean what a bad ass! That’s the thing, women are bad asses everywhere!  I know for a fact that my best friend Jessie, who has two boys and works as a real estate broker, could sit down with that woman dragging the goat, and they would understand each other. Why?? Because they are both two moms trying to survive another day.  It doesn’t matter that one is in Aurora, Colorado and one is in Marrakech, Morocco, they’re both moms kicking ass.

It’s funny how when we choose to see the similarities in those that are different from us our hearts soften to what’s important.  People… People are important.  We all root for mom’s and kids, no matter what their background is, it’s like the law of humanity.  Fear came up for me in Morocco for no reason other than we’re living in a society now where it’s becoming almost common to fear Muslims.  I don’t think I do?  But consciously and subconsciously, it’s shoved down my throat that I probably should… even just a little bit.  But when I saw those Moms with their kids, there was nothing to be afraid of in Morocco. Was it the biggest culture shock I’d ever experienced? Yes!  But foreign doesn’t necessarily mean different.

(I loved this photo.  Two moms, and two little girls having an afternoon chat)

It’s easy to have an opinion on something or someone you don’t totally understand.  But when you take the time to personalize people and hear their stories, it’s a hell of a lot harder to categorize them. When fear comes up for me I think, “It’s time to get curious, and choose empathy.” Too often I worry we’re fighting harder to prove that we’re right, instead of putting that energy towards fighting for WHAT IS RIGHT.

That’s why I’m dedicating this post to the moms of the ‘Dreamers.’ You took a risk to give your kids a better life in America. I can’t imagine making that move was easy.  I find nothing worse than disappointing my own mom. So, on behalf of her, and all the moms who work their ass’s off, every day, sacrificing their lives for their children’s best interests, I hope we as a country don’t let you down.